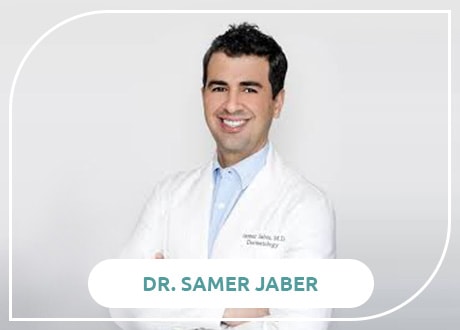 Dr. Samer Hasan Jaber a board certified dermatologist, is the Founder and Director of Washington Square Dermatology in New York’s historic Greenwich Village. A graduate of Vanderbilt University School of Medicine, Dr. Jaber was the Chief Resident at the University of Rochester Medical Center and completed a prestigious fellowship in clinical research at the National Institutes of Health.

Dr. Samer Hasan Jaber completed his undergraduate degree in 2001 from the University of Florida. In 1999, he earned the coveted Anderson Scholar Award with High Distinction from the University of Florida and in the ensuing years at that institution, he was selected as a Share Scholar (2000) and Sue Young Scholar (2001). He also earned the Senior Leadership Award from the College of Agriculture and Life Sciences (2000); Outstanding Senior Award for Food Science and Human Nutrition (2001); and was inducted into the University’s Florida Cicerones Hall of Fame (2001).

Dr. Samer Jaber attended the Vanderbilt University School of Medicine in Nashville from 2001 to 2006, taking a year off to pursue a research training fellowship at the National Institutes of Health through the Clinical Research Training Program (2004-2005). In 2005, Dr. Samer Jaber was awarded the Vanderbilt University School of Medicine’s Bucket Award and was awarded his M.D. degree in 2006. Following graduation Dr. Samer Jaber did a one-year Internship in Internal Medicine at St. Vincent’s Hospital in New York, prior to entering the dermatology residency program at the University of Rochester, which he completed in 2010 and was selected as chief resident.

He has been associated with three private practices in New York City since completing his residency, gaining a rich background in general dermatology. During his years at the University of Rochester Dr. Samer Jaber lectured at the Dermatology Resident Morning Conferences, gaining valuable teaching experience. His research has been published in the Archives of Dermatology, Cosmetic Dermatology and the Journal of Immunology and he is the author of a book chapter on diseases of the sebaceous, apocrine and eccrine glands.

Dr. Samer Jaber was Board certified by the American Board of Dermatology in 2010 and is licensed to practice medicine in New York.

Dr. Samer Jaber has been published in the Journal of Immunology, Cosmetic Dermatology and Archives of Dermatology and has presented at the American Academy of Dermatology national meeting and the National Institutes of Health Dermatology Grand Rounds. His expertise has also taken him across borders as he has selflessly volunteered in war-torn countries and refugee camps alike.

Dr. Jaber’s passion for medical, cosmetic and laser dermatology is undeniable and is illustrated by his unwavering commitment to not only his many loyal patients but to his continuous teaching and volunteer engagements. Dr. Jaber is an Assistant Clinical Professor of Dermatology at the Icahn School of Medicine at Mount Sinai, where he teaches medical students and dermatology residents. In recognition for his work, he received the “Teacher of the Year Award” in 2012, the “Teaching Excellence Award” in 2013, and “Mentor of the Year Award” in 2015 and “Excellence in Teaching Award” in 2016. Dr. Jaber has also been acknowledged on many “Best Doctor” lists and was selected as a New York Times “Super Doctor Rising Star” in 2015 and 2016.

Dr. Samer Jaber has also presented at the American Academy of Dermatology and given Dermatology Grand Rounds at the NIH. Based on his clinical expertise and teaching abilities, Dr. Jaber has a voluntary appointment to the rank of Assistant Clinical Professor in the Department of Dermatology at The Mount Sinai School of Medicine.

While Dr. Samer Jaber’s experience is diverse, his motto is simple – “to treat each patient the way he would treat his own family.” It is this empathetic approach to patient care and subsequent attention to every detail throughout the appointment and treatment process that truly sets him apart. With clinical interest and expertise ranging from Cosmetic Dermatology, to Skin Cancer treat.