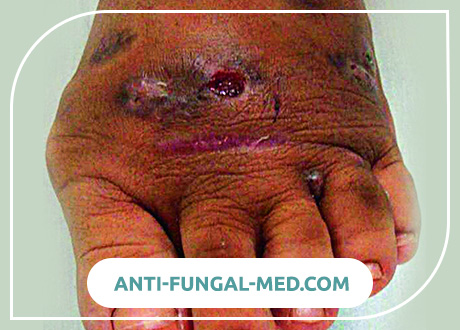 Mycetoma (madur foot, maduromycosis, phycomycetoma) is a focal, chronic, slowly progressive, often painless destructive disease that starts in the subcutaneous tissue and spreads to neighboring parts of the body.

In 1842, Gill described the disease in patients observed in the Indian province of Madura and called the disease “Madura foot” or maduromycetoma, highlighting the pathogen Madurella and Actinomadura. In 1874, Carter gave a full description of the disease in India. Currently, mycetoma is widespread in tropical regions around the world and less common in temperate zones. The most common disease is found in Mexico, Saudi Arabia, Venezuela, Yemen and in the countries located under the Sahara, a sort of “belt” stretching from Senegal to the west coast – through Mali, Niger, Congo and Sudan – to Somalia on the east coast of Africa. The most common causative agents of mycete in North America are Ps. boidii, which is found in the soil of the USA and Canada. M. mycetomatis and S. somaliniensis dominate the tropical regions of Africa and India, and N. brasiliensis and A. madurae are the most frequent pathogens of the mycetomas in Mexico, Central and South America. N. asteroides prevails in Japan. Of the 21 cases described by Kornysheva V.G. (1998) mycetoma diseases in Russia, half were observed in Caucasian people, 6 (29%) were from Azerbaijan and 4 (9%) were from St. Petersburg, a third of patients were from European part of the former USSR, isolated cases were described in Siberian residents , Far East, Central Asia, the Urals and Altai. Rural residents and construction workers accounted for 50% of patients. Described foot mycetoma, due to Ps. voidii in a resident of Grozny and forearm mycetoma in a Tiraspol resident (44 years), due to Strept. somaliniensis, which arose after an open fracture, obtained during the stay of the patient in the Far East.

The term actinomycete is derived from their causative agent — the actymcetes — the bacteria forming the branching mycelium. When causative agents are fungi, this process is called eumycetoma. Eumycetomas Actinomycetoma pathogens include the following aerobic actinomycetes: Actinomadura madurae, Actinomadura pelletierii, Streptomyces somaliensis, Nocardia brasiliensis, Nocardia asteroides, Nocardia otitis-caviarum, Nocardia transvalensis and Nocardia diophony, Microorganisms that cause mycetomas are distinguished by geographic distribution, the color of drusen, and there may be differences in the clinical manifestations of pathological processes caused by them.

Risk factors – trauma to the lower limbs when walking barefoot or in a little shoe protecting skin.

Mycetoma occurs after penetration into the wound or abrasion of soil or other infected substrate (usually decomposing plant debris). Local lesions with edema and multiple abscesses with fistulas are characteristic. For inhalation lesions, respiratory tract lesions are characteristic. The most common lesions of the feet, infection of wounds of any part of the body is possible. Sometimes secondary bone lesions and bacterial superinfection are observed, often ending fatally.

Mycetoma is most often seen in men aged 20 to 40 years. However, it should be remembered that in endemic regions, the disease occurs in both children and the elderly. The ratio of men to women is 5: 1 (according to other sources, 3.7: 1). Often it is found in farmers and other workers in agricultural regions, among Bedouins and nomads, who often damage the skin with thorns and splinters. The most common sites of infection are the feet, usually the rear of the foot (79%). For some reason, the left foot is more often affected. Painless massive tumor-like seals of the foot are riddled with fistulous passages. Complaints are usually rare, and a temperature reaction occurs in cases of secondary bacterial infection. Cases with non-stop involvement occur due to work with the ground, seats and lying on it and includes other parts of the legs, torso, all parts of the hands, head, neck and buttocks. When the scalp is involved, the infection usually begins on the back of the neck and on the forehead.

Early manifestations are small, painless papules and nodes on the sole or rear of the foot, progressing in size. The process develops faster with actinomycetes than with eumitsetomas. Skin manifestations in the form of edema, abscess and the formation of fistulas. When the process spreads, similar foci are also observed in neighboring parts. Old fistulous passages gradually heal and close, but in other places new ones open. Thus, old, long-running mycetomas are characterized by multiple healed scars and fistulas. After many months and years of the course, destruction of deep tissues, including bones, occurs, which is presented as generalized edema, which, however, in most cases remains painless, excluding approximately 15% of patients who are treated due to pain.

The disease progresses as focal tissue formations with the formation of a tumor, areas of suppuration and scarring. Sometimes many fistulous passages are formed, from which pus with grains stands out. The infection never spreads hematogenously, however, it can spread along the lymphatic paths – to the regional lymph nodes and with subsequent suppuration. Such cases require repeated surgical interventions. The tissues involved can also be contaminated with bacteria a second time. The prevalence of soft tissue lesions is best determined by magnetic resonance imaging (MRI).

In bones through the periosteum, the mass of grains can gradually pass into the bone tissue and bone marrow, and sometimes a spontaneous pathological fracture occurs in such. An X-ray examination identifies multiple osteomyelitis lesions, which can be described as cavities and periosteal formations of new bone tissue. Osteoporosis caused by pressure of surrounding edematous tissues and atrophy is also sometimes observed. Due to chronic periosteal fibrosis, the joints are sometimes stiff. With skull mycetomas, diffuse thinning of the bones was observed, caused by the pressure of skin formations and sometimes trabeculae, in some places, although very rarely, there may be small areas of osteolysis.

In typical cases, the presence of mycetomas allows the following triad of symptoms:

The characteristic grains released from the fistulas have a diameter of 0.2-3.0 mm and can be black, white, yellow, pink and red – depending on the pathogen. For example, grains of the species Actinomyces, Nocardia, as well as P. boydii are white or yellowish, while Madurella forms black grains. Grains can be difficult to see directly on the glass and require their fixation in paraffin and dissection in many places. Hematoxylin-eosin staining adequately determines grains and is well suited for diagnosis. Gram stain well reveals branching mycelium in actinomycotic drusen, and Gomori-Grocott and Schiff reaction stains determine a wider mycelium with eumitsetomas. Samples often vary in color, size, density and hematoxylin content in the grains.

A more accurate diagnosis depends on the selection of the culture of the causative microorganism – sowing grains. Mushroom grains as far as possible should be free from foreign bacteria and. A wedge-shaped deep mycetoma biopsy allows you to get good material for both histological and cultural studies. Before being placed on a nutrient medium, the grains should be washed in 70% alcohol and several times in sterile physiological saline. Examination of a biopsy specimen is preferable to sowing secretions from fistulas, since they may contain surface microorganisms or be dead. For primary isolation, actinomycotic grains are grown on Lowenstein-Jensen medium, and fungal grains on blood agar. An antibiotic-free Saburo medium is suitable for subcultures.

Usually two cups are prepared: one is placed at 37 ° C, and the other at 26 ° C. Characteristic colonies should develop within 10 days.

Bacterial colonies are usually granular or as heads. At the same time, fungal colonies are either velvety or fluffy. Further identification is carried out by microscopy of fungi in lactophenol blue and bacteria in Gram and Tsil-Nielsen stain. Serological diagnostics is available only in specialized centers.

Differential diagnosis.
In endemic areas, painless typical subcutaneous consolidations should be considered as probable mycetoma with subsequent investigation even in the absence of fistulas. In cases where the mycetoma involves the bones, it may be confused with chronic bacterial osteomyelitis. Botriomycosis is a chronic bacterial infection that manifests itself as dense fibrous subcutaneous masses with fistulas, and also resembles mycetoma, since even grains are found in the form of pus in tissue samples. Botriomycosis is more common than mycetoma, and with it, internal organs are sometimes involved in the process. The etiological agent of botryomycosis are various gram-positive cocci (staphylococci, streptococci) and gram-negative bacteria (E. coli, Pseudomonas spp., Proteus sp.). In the absence of fistulas, the mycetoma should be differentiated from benign and malignant tumors, cold abscesses, or from granulomas that occur in the injection area.

We need an educational program so that you can see a doctor as soon as possible. Surgical treatment, which some doctors still prefer, usually leads to an immediate relapse or distorted results regarding life safety. Mycetoma in all its stages can be amenable only to conservative therapy or in combination with local surgical intervention. In surgical interventions, only volume reduction operations are performed, and amputations and disarticulations should be excluded. The success of therapy depends not only on the difference between actinomycetes and eumitsetomas, but also on the types of pathogen.

In all cases, actinomycetes use a combination of two drugs. Some of them are always streptomycin sulfate at a dose of 14 mg / kg daily for one month and every other day thereafter. In patients with mycetoma caused by A. madurae, dapsone is administered orally at a dose of 1.5 mg / kg in the morning and evening. In case of mycetomas caused by S. somaliensis, dapsone is also treated first, but if there is no result after 1 month, it is changed to co-trimoxazole (biseptol) in tablets of 23 mg / kg / day in two doses. Mycetomas caused by A. pelletierii responds better to streptomycin and co-trimoxazole, the same applies to N. brasiliensis. However, some Nocardia-induced mycetomas in America are treated with co-trimoxazole and dapsone. Amikacin is a second-line drug, which is associated with existing side effects. The treatment consists of administering 15 mg / kg / day in two divided doses – 3 weeks and Biseptolum 35 mg / kg / day – 5 weeks. The cycle is repeated twice, and rarely when a third course is required. Eumitsetoma caused by M. mycetomatis often respond to ketoconazole 200 mg 2 times daily and local topical cleansing. There is evidence of successful use of itraconazole 200 mg 2 times a day. Rare cases of mycet caused by Acremonium fasciforme, Aspergillus flavus, or Fusarium respond well to itraconazole at a dose of 200 mg 2 times a day. Intravenous administration of liposomal amphotericin B was used for mycetomas caused by M. grisea and Fusarium spp. In a total dose of 3.5 g and with a maximum daily dose of 3 mg / kg. In the described case, only temporary remission was obtained.

In all cases of drug therapy, treatment was continued for at least 10 months. Although side effects are rare, patients, depending on the choice of a drug, should regularly do general clinical tests of blood, urine, and determine biochemical parameters of liver function.

The course and forecast
They are determined by the localization and prevalence of the process. The course is chronic, lasts 10-20 years.

Lesions of the foot or hand often lead to amputation. Death occurs from sepsis or intercurrent illness.

Wearing shoes that reliably protect the feet from minor injuries. Timely treatment of minor injuries with 5% alcohol solution of iodine or other disinfectants.