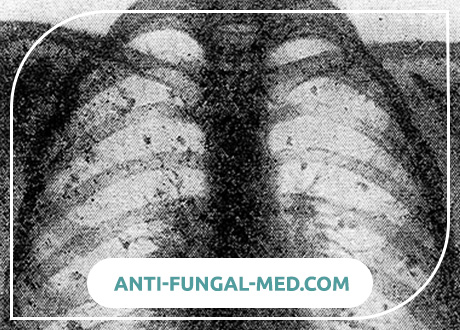 What is Lung Histoplasmosis?

Histoplasmosis is a deep mycosis, which is characterized by polymorphism of clinical manifestations from mild and latent forms to progressive diseases, resulting in the death of the patient. Pulmonary forms of histoplasmosis predominate.

The causative agent – Histoplasma capsulatum is a dimorphic fungus that exists in tissue and culture forms. The tissue form is located in the cells of the organs of the reticuloendothelial system (liver, spleen, lymph nodes). In shape and size (2-4 microns), this microorganism resembles Leishmania or Toxoplasma. The mycelial form of the fungus is never found in the tissues. It develops well on nutrient media at temperatures below 30 ° C. Histoplasmas in both phases are pathogenic for white mice, rats, guinea pigs, golden hamsters, and dogs. The fungus remains for a long time in wet soil (6 weeks) and in water. Dies quickly under the influence of various disinfectants.

The causative agent of the disease persists in the soil. In the contamination (contamination) of the soil, the secretion of the fungus by infected animals and birds (bats, cats, dogs, chickens, starlings, etc.) has a certain value. People are infected by airborne dust. No cases of human infection from sick people and animals were observed. Histoplasmosis is widespread in various countries in Africa and America, it is also found in Europe and Asia, isolated cases of histoplasmosis are described in our country, and imported cases are possible. The most infected areas are from 45 ° to 30 ° north. Soil plays an important role in the epidemiology of histoplasmosis. During the rainy season, histoplasm breeds in the soil. One colony of a fungus with a diameter of 2.5 cm can carry millions of spores. After the end of the rainy season, spores dissipate in the external environment. Infection occurs through the inhalation of a dispute, in particular when carrying out various kinds of earthworks (trenching, construction, etc.). Infection from sick people is not transmitted to healthy people even with prolonged close contacts.

Pathogenesis during Histoplasmosis of the Lungs

The gates of infection are often respiratory organs. Spores of the fungus with dust enter the bronchi and alveoli, where they turn into parasitic yeast-like forms, invade the tissues and cause the appearance of a primary pulmonary focus. With lymph flow, the pathogen penetrates the regional lymph nodes, causing an inflammatory process in them. The presence of the fungus in the tissue leads to the formation of a granulomatous process, which is permitted by necrosis, ulceration or petrification of the lung tissue and lymph nodes, less commonly by abscess formation. This form resembles primary pulmonary tuberculosis. Histoplasm antigens penetrate the general circulation and lead to an allergic restructuring of the body (which is detected by intracutaneous test with histoplasmin) and the development of specific antibodies. At this process can end, not giving severe symptoms, sometimes the process proceeds in the form of inapparent form. In other cases, hematogenous dissemination of the fungus occurs throughout the body with the defeat of many organs. The process progresses rapidly and often leads to death. In the occurrence of this form of great importance is the state of the immune system. Such a course is usually observed in HIV-infected individuals.

Symptoms of Histoplasmosis of the Lungs

According to the clinical course, the following forms of histoplasmosis are distinguished:

Most common acute histoplasmosis of the lungs, which is caused by airborne infection. Acute forms of pulmonary histoplasmosis can be asymptomatic and can be detected only when an intracutaneous test with histoplasmin is set, according to positive results of serological reactions, sometimes by petrificates in the lungs and hilar lymph nodes. In milder forms that predominate, patients feel good, they often continue to work, there is no fever or short-term (3-4 days), and the total duration of treatment is 2-3 weeks. An x-ray examination reveals an increase in the pattern and an increase in the shade of the roots of the lungs, only in some patients small focal shadows are observed, mainly in the lower parts of the lungs.

Severe forms of acute histoplasmosis of the lungs are characterized by a sudden onset, rapid increase in body temperature to 40-41С. Temperature curve of the wrong type with a large daily span. Awesome chills are replaced by diffuse sweating. Patients complain of severe headache, weakness, pain in muscles and bones, cough, chest pain. Some patients have nausea, vomiting, diarrhea, abdominal pain. The duration of fever 2-6 weeks. In the period of recovery, a subfebrile condition, asthenia, long-term disability, sweating are observed for a long time. These phenomena persist up to 1 year. Percussion of the lungs can be noted some shortening of the sound, with auscultation – finely bubbling moist rales, mainly in the lower regions of the lungs. Radiological reveal large and medium-sized shadows in the form of “cotton flakes”, which can merge. Subsequently, the infiltrates disappear completely or foci of fibrosis and calcification form in their place.

In moderate forms, clinical and radiological manifestations are not so pronounced, fever persists for about 2 weeks, and inpatient treatment lasts about a month.

Chronic disseminated histoplasmosis is characterized by a sluggish course, the patient’s state of health is satisfactory at first, fever is not expressed, and skin and mucous membranes are typically involved. Characteristic ulcers form in the tongue, mucous membranes of the pharynx and larynx. In the future, the condition worsens, there is a fever of the wrong type (septic), there is an increase in the liver, spleen, all groups of lymph nodes, damage to the stomach, eyes (chorio-retinitis), etc.

Features of histoplasmosis in young children.
Histoplasmosis can be observed in children of the first months of life (2-6 months). Children’s disease is characterized by fever (38–39 ° C), liquid foamy stools with an unpleasant odor, pallor, and sometimes moderate yellowness of the skin and mucous membranes, a significant increase in the liver (5–9 cm below the costal arch) and spleen (3-5 see below the costal margin), in all cases the lungs are involved in the process. In the study of blood, there is a progressive anemization, leukopenia, elevated bilirubin content, the activity of serum enzymes (AlAT, AcAT, alkaline phosphatase, etc.) increases. In peripheral blood, poikilocytosis, anisocytosis, polychromatophilia, and thrombocytopenia are noted. The disease proceeds as disseminated histoplasmosis. In all cases (prior to the initiation of anti-fungal therapy), histoplasmas can be isolated from the blood and from the bone marrow.

Histoplasmosis in HIV-infected individuals.
Reduced immunity significantly increases the risk of histoplasma infection. This problem is particularly relevant in regions that are endemic for histoplasmosis. Compared with aspergillosis and candidiasis, histoplasmosis is less common (in 0.5% of AIDS patients). In endemic areas of the United States, this percentage is much higher. Histoplasmosis in HIV-infected patients occurs as a hematogenous disseminated process and is characterized by high fever, lymphadenopathy, a significant increase in the liver and spleen, cough and infiltrates in the lungs are permanent manifestations. In the study of blood marked leukopenia and anemia. It runs hard, even in the initial stages.

Diagnosis is hampered by negative results as an intracutaneous test with histoplasmin, and serological reactions. In the presence of histoplasmosis (especially disseminated forms), the patient must be checked for HIV infection.

Diagnosis of Histoplasmosis of the Lungs

Recognition of histoplasmosis presents significant difficulties, especially in areas not endemic to the disease. To confirm the diagnosis, the pathogen is isolated from sputum, scrapings from the mucous membrane, blood, punctate abscesses, lymph nodes, liver, spleen, bone marrow, smear microscopy, isolation of a fungus culture, and biological tests on animals. To confirm the diagnosis of histoplasmosis in young children and in HIV-infected individuals, culture selection from bone marrow, blood and lungs was found to be the most informative. Much less frequently, histoplasmas were found in the tissues of the lymph nodes, skin, brain, intestines. In the diagnosis of histoplasmosis in individuals with a normal immune system, you can use serological tests and an intracutaneous test with histoplasmin. For the detection of specific antibodies in the serum put RAC, precipitation reaction and agglutination of latex particles loaded with histoplasmin. Diagnostic captions are 1: 16-1: 32. It is better to conduct research in the dynamics, especially in acute forms of histoplasmosis, since the reaction becomes positive only from 2-4 weeks of illness. Very simple skin test with histoplasmin. 0.1 ml of the allergen diluted in a ratio of 1: 1000 is administered, the results are taken into account after 24 and 48 hours. The reaction becomes positive after 3-4 weeks from the onset of the disease. Therefore, the most rapid and reliable method of laboratory confirmation of the diagnosis is the isolation of the fungus culture.

Treatment of Histoplasmosis of the Lungs

Patients with mild and moderate forms of histoplasmosis do not need the prescription of antimycotic (rather toxic) drugs. You can limit the treatment regimen, nutrition and symptomatic therapy. With histoplasmosis of the eye, topical corticosteroid preparations, desensitization therapy using histoplasmin, as well as photocoagulation are indicated. Prescribe antihistamines, vitamins and other pathogenetic agents.

In the treatment of histoplasmosis, azole preparations (ketoconazole, itraconazole) or amphotericin B are used. Doses of drugs depend on the clinical form of the disease.

Patients with mild and moderate forms of histoplasmosis do not need the prescription of antimycotic (rather toxic) drugs. You can limit the treatment regimen, nutrition and symptomatic therapy. In severe forms of acute histoplasmosis, amphotericin B is prescribed at the rate of 1000 U / kg body weight per day. The drug is administered intravenously for 4 hours in a 5% glucose solution. To determine individual tolerance, the first administration is made at the rate of 100 U / kg body weight. In the absence of side reactions and satisfactory tolerability of the antibiotic, the drug is injected at the rate of 250 U / kg and then gradually increase the dose to 1000 U / kg. The antibiotic is administered every other day or 2 times a week. Duration of treatment 4-8 weeks. With the introduction of amphotericin B, there are side effects: thrombophlebitis, nausea, vomiting, muscle pain, cramps, intestinal bleeding, anemia, toxic kidney damage.

In chronic forms, long-term administration of amphotericin B with repeated 6-7-day courses in combination with surgical treatment gives the best results.

You can also use amphoglucamine (Amphoglucaminum) – a water-soluble drug amphotericin B, intended for oral administration. It is less toxic, of the adverse reactions noted only impaired renal function. Available in tablets of 100,000 IU (in a package of 10 or 40 pieces). Treatment is prescribed with 200,000 units 2 times a day after meals. With good tolerance, the dose is increased to 500,000 IU, 2 times a day. The course of treatment 3-4 weeks. Monitor the condition of the kidneys! When protein appears in the urine or the level of residual nitrogen rises above 30 mmol / l, amphoglucamine is canceled. With histoplasmosis of the eye, topical corticosteroid preparations, desensitization therapy using histoplasmin, as well as photocoagulation are indicated.

From foreign drugs, you can use ketoconazole (Ketoconazole). The drug can be used in the treatment of histoplasmosis in HIV-infected people alone or in combination with amphotericin B. Of the other drugs used in the treatment of HIV-infected people, fluconazole, which is prescribed in 50-100 mg per day. Prescribe antihistamines, vitamins and other pathogenetic agents.

In asymptomatic forms of histoplasmosis, etiotropic therapy is not performed.

Specific prevention is still under development. It is recommended that all-round prevention of air pollution in places of histoplasm spreading in soil, protection from inhalation of air contaminated with fungi in rooms, earthworks, mycological laboratories, and thorough disinfection of air in these laboratories. Control over plant materials, fruits, vegetables, appropriate processing of dusty objects and materials, arrived from areas where the disease is common. A patient with histoplasmosis is not dangerous for other people.